The term “BAME” (Black, Asian and Minority Ethnic) is a (largely) unquestioned acronym used collectively to describe 15% of the UK population. However when thinking about it in detail, the inadequacies are somewhat striking. The frequent description of ethnic minorities in the aggregate hides complex and nuanced identities of people that make up this group. The sum often fails to showcase the unique elements of each of its parts.

This has never been more apparent than over the last few months. As Britain battled coronavirus and people’s lives altered and adjusted to a new normal, the term “BAME” became frequently used by politicians and media commentators alike. First, in relation to the doctors and nurses on the frontline- many putting themselves in harm’s way, some fatally, to support the increasingly over-burdened NHS. With the sad news of NHS staff deaths first announced in March, it was striking how many were from an ethnic minority background, and all from different parts of Asia, Africa and the Middle East. The death toll in subsequent weeks laid bare the disproportionate impact of the disease on the lives of these diverse communities; a fact later confirmed by the government in its COVID-19 disparities report.

In amongst all this, a few of us received a message from British Asian Trust, a charity founded by prominent members of the British Asian community and Prince Charles to tackle poverty in South Asia. As a UK-based charity, the Trust wanted to recognise the hard work and contribution of “British Asian heroes” and needed volunteers to support the campaign. A number of us responded to the call- inadvertently mirroring the communities that the Trust works with; British Bangladeshis, Indians and Pakistanis as well as those who are white British. The campaign would highlight people who were performing ordinary acts of service and kindness during the pandemic, whether on the front line through their businesses and voluntary work or in public life.

As the team put out a call on social media for nominations, the general expectation was that the stories we receive would likely reflect some of the stories that we already knew. The doctor or nurse on the front line, the shopkeeper selling essentials...insert stereotype here. Of course, it is true that many of our British Asian Heroes were doing just that, however, a degree of unconscious bias had crept in without us realising it, expecting the stories to reflect this narrow experience, despite many of us being from these communities ourselves. The stories that materialised, instead, painted a picture of true diversity, showing how integral these communities are to the fabric of UK society. Shining a light on people who are often typecast or overlooked, we were able to showcase some incredible acts of bravery, kindness and heart.

Despite the higher risk to their communities, with some battling existing health and socio-economic inequalities, we shared stories of people across the country who were not only supporting the vulnerable and elderly within their own communities, but extending their reach past their own walls, faith and race to help anyone in need. Voluntary groups from all faiths and backgrounds such as Planet Mercy, Sewa Day and the Midlands Langar Seva Society were stepping in where government agencies could not, providing support via dedicated helplines, feeding refugees and the homeless and supporting NHS workers.  As well as these stories of kinship, we found people working in a number of different professions and vocations, from pilots supporting British repatriation efforts, mental health practitioners setting up free counselling helplines, octogenarians promoting fitness for the elderly and DJs and dancers getting people grooving. All these stories counter prominent narratives that some British Asian communities can be insular. They also showed that “British Asian” covered a multitude of identities representing a beautiful patchwork of passions, skills and talents - all of which will be crucial as we start to rebuild the UK following lockdown.

With the recent Black Lives Matters protests and data on the disproportionate racial impact of COVID-19, it is clear that the UK has more work to do before people from “BAME” backgrounds feel equal in society. Campaigns such as British Asian Heroes help to show the human face of the people who are calling for this - taking us beyond a faceless, homogeneous group and showing our contribution and commitment to making this country better. In doing so, it should encourage greater empathy and kindness - something we could all do with a little more of.

While British Asian Trust’s lockdown edition (of daily features) has come to an end, the campaign lives on! Each month we will be showcasing examples of exceptional work being done by British Asians as we begin to rebuild as a nation. 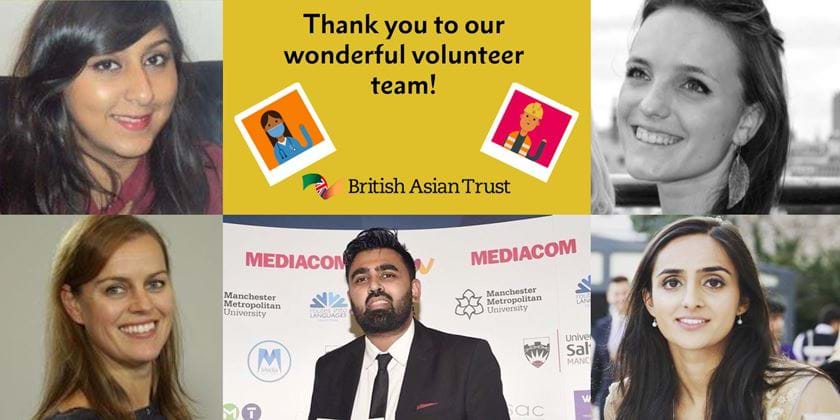 The British Asian Trust is very grateful to all our volunteers – Ann, Mayuri, Sania and Sam for leading this campaign with so much warmth, genuine spirit of all things good in our community, creativity and hard work. They bought light to our team and wider support base during some very dark days and they are truly our heroes!