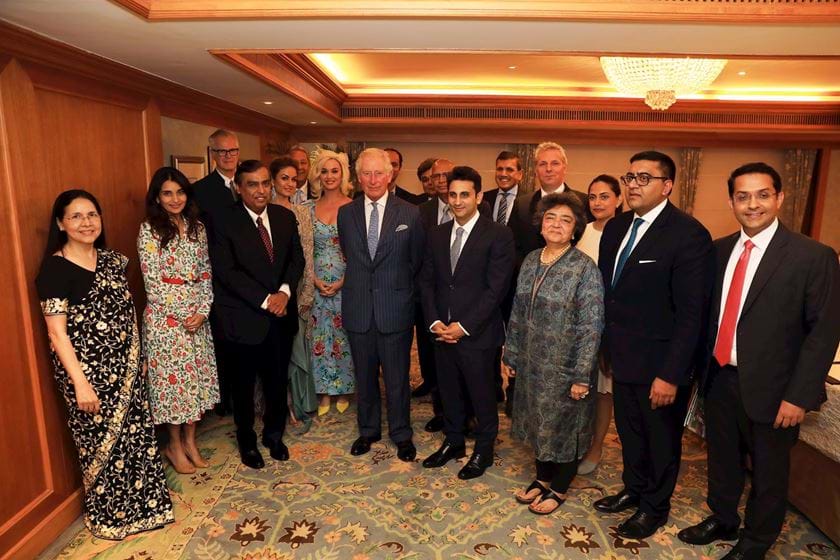 I have just returned from a hugely exciting week in India which saw His Royal Highness The Prince of Wales come together with British Asian Trust advisors and supporters, school children supported by the Trust, and Katy Perry, the global pop superstar!

I have been reflecting how extremely fortunate we are to have The Prince as our Royal Founding Patron – a privilege and an honour I have not experienced before in 25 years in the charity sector.

The Prince’s proactive involvement in our work, together with his progressive thinking, plays a huge role in shaping the future direction of the Trust to have a positive impact on millions of lives in South Asia.

On his short visit, The Prince of Wales attended a meeting of our advisors and supporters, chaired by Mukesh Ambani, to discuss our programmes and initiatives in India. He contributed to discussions on wide ranging topics such as social finance, development impact bonds, the potential for corporate CSR to drive positive social change and ambitious plans to scale up our work in child trafficking. He also met with British Asian Trust supporters including Ratan Tata, Natarajan Chandrasekaran, Adar Poonawalla, Zarin Darulwala and Zia Mody.  We also had the pleasure of being joined by pop royalty and global superstar Katy Perry! It was fantastic for her to not only meet The Prince but to also learn about the positive work of the British Asian Trust.

I was also fortunate to join a memorable celebration of His Royal Highness’s 71st birthday, when he met around 20 children from Kurar Village Mumbai Public School. The children were very excited to present him with a birthday cake (BAT-branded of course!) and sing ‘Happy Birthday’!

Meeting with the children was not just a celebratory moment for The Prince of Wales’s birthday. All the children attend a school that is being supported by the Quality Education Development Impact Bond (DIB). The DIB was launched a year ago by an international coalition led by the British Asian Trust, with the aim of delivering real results-based outcomes; improving the quality of education in India. In the first year alone, our programmes helped 30% more children to overcome learning gaps, achieving basic literacy and numeracy skills.

To have been able to come together with The Prince of Wales to celebrate this success, was a real milestone moment and a testament to the determination we have at the British Asian Trust to tackle challenges with new and innovative methods. The DIB, operating in the states of Delhi, Maharashtra, Uttar Pradesh and Gujarat, has helped to deliver four programmes at scale across 600 schools, reaching over 100,000 students aged 5-11 in its first year.

However, the work is far from done. While school enrolment in India is high at 96%, the quality of learning remains poor. Children in India are on average, two grades behind the level that is expected for their age in literacy and numeracy.

There are a number of exiting initiatives that will be a focus for the British Asian Trust over the coming months. Last month we officially launched in Bangladesh, with aspirations to launch an even bigger DIB there next year, focusing on the development of skills for workers in the informal economy.

When I reflect upon the success of this trip, what remains poignant is the need for financing to change in international development. What our model approach has demonstrated is the success of the DIB in both bringing in up-front investment as well as delivering real outcomes.

Mainstream forms of development have proven to be stagnant and are unable to adapt to the shifting demands of philanthropy. Furthermore, they don’t protect the donor if projects are unsuccessful. DIBs bring more actors into the equation; and allow investors to front the capital required to deliver a pre-agreed return upon social impact. This rewrites the script of traditional philanthropy where the funder takes all the risks on their shoulders.

Inspired by the vision of His Royal Highness, it is my hope not just to better the lives of those across South Asia through education, but to also alter the course of philanthropy and how it is delivered across the world.